You are here: Home / Archives for Rubber & Elastomers

During the Innovations in Rubber Design Conference of IOM3, which is being held 7-8 December 2016 at 4 Hamilton Place, London, UK, an official from Tavdi Company Inc will be presenting the Yerzley Mechanical Oscillograph (AYO-IV).

The ASTM D11.10 subcommittee has incorporated the latest automation of the AYO-IV test method by Tavdi Company Inc into the D945-16 Standard.

This instrument is completely computerized and equipped with the latest user-friendly software, eliminating all operator induced errors in data evaluation. No longer is there a need for graph paper, nor the required interpretation of the resulting graph; all calculations are automated so that results are available once the test is completed. A typical compression or shear test takes less than five seconds, after which the resulting trace and the calculated parameters are displayed at natural frequency of that sample.

An additional parameter, tangent of delta, the measure of energy loss due to damping, is also calculated and reported. AYO-IV predicts the mechanical properties of rubber, plastics and other polymers.

In this study we investigated elastomeric materials based on natural rubber used in the manufacture of rubber and rubber-metal vibration isolators. Basic anti-vibration properties were identified and stability over time was predicted. To achieve the objectives, tests were conducted on a mechanical oscilloscope Yerzley AYO-IV.

According to the research (Figure 1), we observed that replacement of the active carbon black N220 with high structural properties on the active carbon black К-354 and P-234 with a low index of structural in the ratio 1: 1 leads to a slight increase in such parameters as static and dynamic modules, hysteresis loss, and also to reduction of the coefficient of elasticity and vibration isolation.

According the results of the research we were constructed the graphics of combined curves (Figures 2, 3 and 4).

Not all rubber compositions are the same. It turns out that there is an optimum level of carbon black for maximum energy absorption capacity. One of our clients ran a series of tests on their Advanced Yerzley Oscillograph (AYO-IV) for Natural Rubber and Chloroprene Rubber at five different levels of carbon black. Their results show a definite maximum impact energy absorption level at 75 parts per hundred of rubber (PHR). 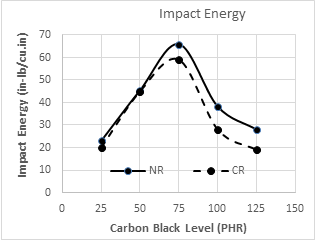 From a single test cycle, we determine:

The Advanced Yerzley Oscillograph (AYO-IV) satisfies the requirements of ASTM D945-12 and can be viewed here.

Your Partner in Precision